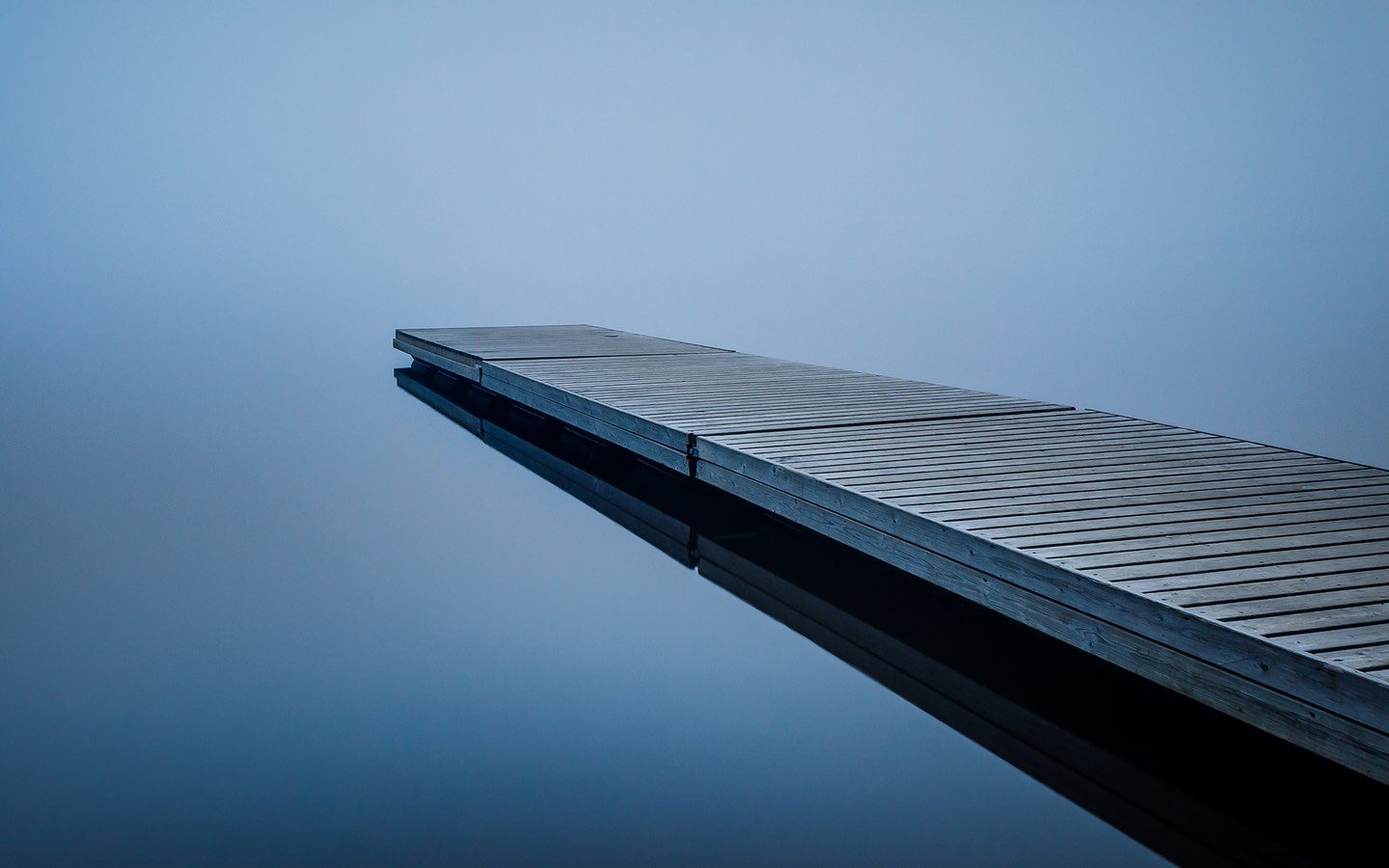 As I was conversationing (this is a neologism) with my friend J., something struck me, something I wasn’t really able to name at the time; something I decided to call the Tightrope syndrome. Some would prefer to call it “balance”, but I do like the word “tightrope” as it inhabits more pertinently the dynamics many of us, if not all, are confronted to.

This syndrome usually starts to unfold when the self uses reflective walls to project on its own needs, in order to create a mental structure of how the world should work. The prospect is then carried across, as long as something meaningful comes back. This mental structure of how the world should work becomes then the narrative one uses to go on with his or her own life, as it erects guiding principles and leading archetypes: different lenses, constantly used by the same observer, over and over. Such mental structure is the only way we have to articulate our own understanding of the world, our understanding of our own biases, but more importantly, our understanding of our own needs.

The syndrome continues to evolve when we start to polarize these needs, and shape them into and onto something. Basic needs, such as food and shelter, usually materialize the rope; higher needs, such as social acceptance and integration, become the balance pole. I could make fun of Abraham Maslow, by saying that these higher needs, such as esteem and self-actualization, are more intrinsic and constituents of the basic needs, rather than the natural outcome assuming layers underneath are stable enough.

Finally, this syndrome thrives when one fully develops the understanding of the world using the polarized needs. This host-parasite coevolution scrambles and filters our ability to think critically, or apply analytical understanding of the situation. While the syndrome is latent, its manifestations are quite common. The line usually goes like this: “I need to fix X and talk to Y; after that I’ll be Z.”

Most do not realize that, but the truth is, “balance” is just tightrope walking masqueraded, because losing “balance” often hurts much more than if it was a simple fall. When our higher needs are no longer met, this is damn of a fall, more than a simple slippery rock on a rainy day. And even that bitch hurts.

This syndrome lives in us, and we are so much in the need, this is a line we all snort every single day; while it burns the nostrils, the high is the only thing we can use to keep justifying our trivia.

It seems to me that we need it to live, at least as long as higher needs are considered somewhat valuable. But this is a tricky game, as we don’t really know in our societies how to regulate the states of the mind. We unfortunately only aggrandize the extremes and keep creating extra frequencies in the spectrum of our expectations. When one is not descending, he is ascending; this is exactly how this syndrome thrives. It only requires components to validate itself, give itself plenty of soil.

The Tightrope syndrome is malignant, as it is polymorphic: different needs justify different things; while in the end, it’s a zero-sum game. This is the same self, longing for wholeness, longing for a meaningful existence, and expecting to be careful enough not to slip. I do think this world also has the capacity to integrate our interactions with others, because they represent their own weight, or their own gravitational impact; more than luck, less than serendipities, relationships are a bet.

Every time I meet someone, I slightly lose my balance, and I hope this person will not push me away. Rousseau was well aware of such notion; and I stand by him when he says that “It is illogical for a man to surrender his freedom for slavery; thus, the participants must have a right to choose the laws under which they live.” These very same laws can be seen as physical laws (or course such physicality greatly depends on ideological constraints) that govern the shape and length of the rope.

“Balancing life” actually contains various angles for its meaning, but as the name of my syndrome entails, I chose to see it as our desperate and ever-frightened states of consciousness, whereas our best attempts only equal our ability to run away from our personal responsibilities, and use external and social factors to deny the choices we make. I’m not saying we control the outcome of our choices, but I deeply think that more than often, we blame the others for our own (in)ability to walk on this rope.

This is a highly mutable syndrome; it is able to integrate both positive and negative artefacts while producing coherent representations of the world. Think relationships. When they go smoothly, the greater the balance, and when they go sour, this syndrome is able to create (fake) explanations of every single thing that can be fixed: as balance shall be restored.

The mind is an ever-evolving structure, it is only able to cumulate self-reflected inputs, and it goes on forever. The output it produces reinforces this structure, polarizes needs in a greater fashion, and embellishes the needs. Needs become self-justified, they give more stability (a car, a job, a house, a lover), but are rarely questioned at their core. The Tightrope syndrome is a potent inhibitor for the deamination of our ideology, our culture, and our symbolism. It synthesizes its own version of reality and transmutes false assumptions into feelings of grandeur. Saving the world is a by-product of the syndrome.

To my understanding, the environment we find ourselves in is a great catalyst; culture (and its derivatives, such as alternative culture and underground culture) is a fruitful seed, as it offers ample choice for the building blocks of the mental map. The Tightrope syndrome doesn’t require much though, just a self, thirsty for existence. Usually, within the environment, there is enough material for it to mature. While it excels in environments that promote self-betterment, it also possesses enzymes that convert ideological substrates into products of Truth.

These self-validated, self-confirmed needs often leave us on the brink of catastrophes, they are like pinched nerves that require attention; they did not left us with much choices anyway.

As advanced the mental representations of the word can be, and as genuine they seem to be, they only shift our focus away, and paint on the canvas of our existence something called “Life”. This painting manifests itself in the form of the walker, only limited to be a metaphor for the voyage, the starting point and the “Goal”.

The voyage is the main-vein; it gives purpose and justifies almost all means. The self is because there is a voyage that allows it to participate. It is often incarnated in the form of “good” relationships, great friends, and outstanding partners.

The starting point, also referred as the “childhood issues”, often constitutes a good start. It permits the creation of the narrative, and gives right to monolithic totems. These totems could be reframed in the context of Jungian archetypes.

Finally, the Goal is the vision, the dream, and the realization tantamount to false hopes.

This Goal (or self-actualization) is also a bet unfortunately. It solely depends on the moons alignment, “vibes”, and Karmic laws I presume. It is a bet because so much of our interactions leave us with this feeling of losing balance. It is a bet because there isn’t a single thing that can be predicted. It is a bet because if death strikes before, it ceases to exist. As it is contingent on so many things, at various levels, this is also why the mental structure mostly focuses on the rope and the balance pole. These are all factors that can be (almost) controlled. Being nice to people and eating organic food is usually a good start. Spirituality and divine realization often follow. Indignation sometimes slips in-between.

While many theoreticians did great jobs of building frameworks for explaining how to accept this, few of them dared to uncover the flesh, where we stand naked. There were too many humanitarian causes casting shadows, and too many revolutions with incandescent light bulbs.

It was easier for us to prefix all of our actions with “self”, and hoping it would be enough to cover up most of ours fears.

At least, it left us with the impression that there must have been something, somewhere that justified this frenzy. It wasn’t so much about building the hope that we could live free of this syndrome, rather, giving us the opportunity to reflect with a bag full of biases. The Tightrope syndrome creates hard links of interdependency between the starting point, the voyage, and the Goal; but while intertwined, still manages to leave ample room for the voyage to take its own path. While the link to the Goal loosens a bit, the syndrome still manages to maintain a decent coherency. This is often revealed by sentences that contain “greater” in them.

It only leaves me with the impression that it creates multiple patterns, most of the time epigenetically influenced. In only needs these reflective walls I talked about earlier. This could go on forever, and this is a nice dream, a dream that usually realizes itself. Wonders and chimeras can be accessed by anyone; it’s just a vue d’esprit.

The syndrome may invoke such mythos to stabilize weakened structures, as it occurs when events in life unfold unplanned. By invoking such stories, the syndrome is able to create new cells, themselves reinforcing the existence of these stories “It was her fault”.

Yes, and Camus nailed it.

But this is one-way ticket, and once the fall is embraced, the self is only seen as miserable as desperate.

How could it not be? Its entire universe disappearing left back, disintegrating. Notions become mere words, meaning becomes mere syllables. Things after that are neither good nor bad, they just are.

Higher needs become a reassuring story, sparkles around a winter fire, nothing more. The fall dulls both intellect and sensibility. After all, keeping the walk on the rope assumes everything around is frightening.

Can one be cured from this syndrome? I think so, but I think no one really chooses it. The cure lies beneath the surface; it’s there, somewhere, perhaps between two relationships, a couple of good friends.